I feel like a little kid in a toy store. I've been researching timelines for my new historical ms and haven't hit any road blocks so far, everything is at that bright and shiny stage. Oooooh....awwwww. Cool beans. I do have to admit though...I'm a little nervous about venturing out of my comfort zone. This project will definitely be a challenge. I think if I try to stay organized and plot this out it'll make the writing flow easier. Hopefully. My next step is to sit down and interview my characters. I wonder if a bottle of sweet Oklahoma wine would help? Big thanks to Chicki for sharing the wonderful articles!!

Hubby will be home on Thursday and we've got a big cookout planned for the 4th of July. Mom and I went this morning to Sams Club to stock up on meats that hubby will put in the smoker early Saturday morning. His brisket and baby back ribs are soooo tender and to die for. Our secret spice rub...we add cinnamon and brown sugar to common bbq seasonings. Of course I'll have to make baked beans (add onion flakes, hickory bbq sauce and brown sugar to several cans of Bush's baked beans), macaroni salad and potato salad. I can't give out my secret sauce on those two salad's or I won't get invited to bbq's anymore if someone else can make it. LOL.

Does anyone else have big plans for this weekend?
Posted by Chelle Sandell at 10:55 AM 10 comments:

Kinda. LOL. Mom has had her first surgery and did very well. Thanks so much for all of the prayers and support. Also...my cowboy story was passed up again by my target editor. Which had me doing some soul searching and talking with writer friends/crit partners.

I have several friends who will shoot straight with me and tell it like it is. One in particular, Rae, really held my feet to the fire. She asked me if I was writing what I love or merely to target a particular publisher with hopes to publish. As we talked, I realized that I've been chasing editors and lines that I "enjoy" reading. And to be honest...that's not saying alot. I absolutely love to read. And I can read just about any genre. Except academics. Something in my brain rebels and shuts down into sleep mode. But I wasn't targeting Harlequin/Silhouette simply because I'd expected it to be easy, it was because I grew up reading Harlequin.

When I first decided to seriously write geared toward becoming published, I searched the different publishers and came across eHarlequin Online Community. They were the only publisher at the time with an active online outreach to their authors, unpubbed writers, and their readers. I read alot about their "formula" for the different lines and thought that by keeping my word count short, and targeting a publisher who accepts unagented material and supposedly is always looking for new talent, that I might actually have a better shot. Not that I thought I was a better writer than the thousands of others sending in submissions, just that with so much information available...I had an idea as to what the editors wanted and it wasn't as much of a crap shoot. It also helped that the lines I wanted to target published at least four books a month and may be more apt to take on fresh voices.

And I still believe that. Sorta. I'm just wondering if my writing fits in that category. Is that where I really want to be? So instead of babying me and letting me feel sorry for myself, my friend asked if I had a particular story that I kept going back to. Why, yes. Yes I do. When I was in college, I wrote a paper over my Native American family history. (Brag alert! Be warned!) The history professor was known for his snide comments and not being generous with A's. I was completely shocked when I received an A-. He even went on to discuss it with my literature professor and they both nominated my paper to be presented at an upcoming symposium. I thought I would vomit. I'm not really sure how I made it through the presentation but finally relaxed after it was over when I had several people ask questions and seem interested in what I had found. People actually clapped when I finished.

Little did they know that they'd created a monster. But life happened. I married and immediately had a baby and had to put off the college dream for a full-time mom job and a full-time day job working for a law firm. Writing didn't seem to fit into that schedule until much, much later. Actually another husband and another baby later. I was put on bed rest during the pregnancy and my hubby got tired of me whining about how bored I was. A laptop seemed to quench that thirst, on top of lots and lots of books to read. Put the two together...and there ya go. My writing dream smacked me in the face.

Anywho...didn't mean to ramble and bore you guys. So now I'm back to square one...just with a little more experience. What do I want to write? REALLY write? I think I'll take that giant leap off the cliff...I'm going to challenge myself and work on a historical. So there ya go. Ya had to wade through all that crap to hear that I'm going in another direction. *sigh*

Happy Monday!!
Posted by Chelle Sandell at 8:05 AM 8 comments:

Not a bad day. Just not a productive one. I got up with great intentions of getting something accomplished today. Little man easily distracted me by insisting he NEEDED to go swimming this morning. And then it was like I had water on the brain and just kinda lost track after that. At least we had a great sandwich at McAlister's Deli and their sweet tea is to die for. The weather was a little warm but we enjoyed running our errands. And Jennifer tempted me by changing her blog design...so of course it inspired me to play around with mine;)

Thanks for all of your well wishes for mom. She's still feeling under the weather but we go tomorrow to talk with the doc's about the surgery on her neck. Hopefully everything will go as planned and we can proceed on with doing something about her stomach.

Hubby comes home Thursday night for 5 days so I'll try to get as many pages down as possible. Good thing is that he'll take little man on Sunday and go fishing with his dad, so they'll both be out of my hair for the day and I can crank out some pages. I went to the Southern Cross SoCNoC challenge page to update my measly word count and was blown away by how many people had logged close to or over 30k words already! One of my crit partners included. WOW!! Kickin' some major word count booty guys. Rock on!! One person already had 42k...in 15 days!! Wish I could channel Speedy Gonzales...
Posted by Chelle Sandell at 5:16 PM 6 comments:

It's so nice to feel like we're getting back to an organized life. Bwahaha. Those that know me can quit laughing now. I don't think we'll ever actually BE organized...but a semi-scheduled day is a wonderful thing. At least I was able to press the send button for my pitch submission. I've officially entered the online pitch for Silhouette Desires. There were a ton of entries last time so I'm not expecting to final this time either. But I'm back to subbing. That's the most important thing of all.

But...I definitely came home at the right time. My mom's health is worse than what I was being told. It's hard to see a parent getting older and becoming frail and dependent. She really scared me when she went through her cancer ordeal. It was a very eye-opening time for me. Well now...I'm seeing her frustration with her failing strength. She's also started getting really grouchy and forgetful. We saw this happen when she was first diagnosed with cancer. But they've done blood work and CAT scans...and nothing new. She's so weak now though that she can hardly walk through a store without having to sit down.

Sucks to get old. For me anyways....Can't imagine what it's like for our parents. *sigh* Sorry to be a Debbie Downer...just hug someone you love today.

Hugging you guys! Have a great weekend.
Posted by Chelle Sandell at 10:30 AM 8 comments:

I'm not quite settled in, but I've made a good dent in getting a little more organized. Hubby has gone back to work...sad and lonely...he understands why we need a little more stability and is willing to sacrifice for the greater good. I'm sure I'll have some major pampering duties ahead on his next break. LOL. Little man is happy to be home with his jungle gym and swimming pool, but really misses the alligators.

I worked last night on my pitch ideas for the 15th. Why am I so nervous this time around? I really, really, really....really want this. Maybe that's it. Friends helped me today with my pitch submission and I think it's just about ready to go. Which means a serious writing marathon in my very near future...like tomorrow. LOL. I have some serious pages to crank out to get this thing finished.

I hope everyone is well and having a great week?!
Posted by Chelle Sandell at 7:54 PM 2 comments: 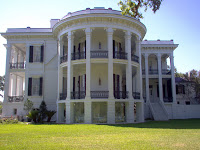 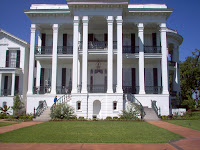 A week ago I was counting the days until we left for home. Now? I'm wishing we lived closer to New Orleans and the beaches. This past weekend we were able to visit Nottoway Plantation, New Orleans and the famous historic cemeteries. I hated to spend $20 bucks per person to participate in the many tours walking around, but we paid $5 for a little two page guide that listed a few of the more famous burial sites. Even my little guy and big ol' corn fed cowboy seemed to be interested in my morbid fascination with history.
Today is the first day of my writer's challenge so I'm not going to be able to go into full poetic detail...I'll leave you with a few pictures. I've also found a cool link to share about the different tomb descriptions.
New Orleans Cemeteries 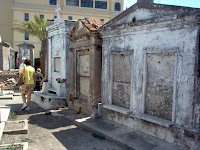 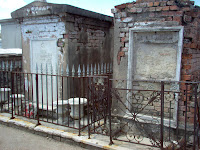 Posted by Chelle Sandell at 6:33 AM 8 comments: